Be Careful What You WASH For!! 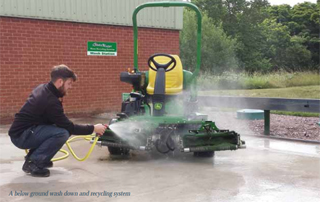 A below ground washdown and recycling system

The much talked about SUD (Sustainable Use Directive) which aims to control pesticide usage has been the main focus of talk among greenkeepers and chemical sales people. However it is the water quality directive that is driving much of this. We are all well informed by now against letting spray tank washings enter water courses, about keeping an unsprayed strip of ground around streams and lakes on the course, and how chemical residue from even the foil cap of a pesticide container entering a watercourse can be detected by the stringent new water quality tests.

Washing course equipment means that wash down areas are exposed to contaminants such as oil, grease, anti-freeze, herbicides, fungicides, insecticides and detergents. The biggest cause of concern is once hydrocarbons are removed from machinery, where do the contaminants end up going?

The WFD (EU Water Framework Directive) applies throughout Europe. Basically the regulations are designed to prevent pollution of the groundwater, rivers, streams and lakes etc. and offenders can be prosecuted. Within the scope of the WFD (which is a massive amount of documentation) specific directives have been drawn up that concern the groundwater and affect the washing of turf machinery.

For example, in Article 6 of DIRECTIVE 2006/118/EC OF THE EUROPEAN PARLIAMENT AND OF THE COUNCIL of 12 December 2006 on the protection of groundwater against pollution and deterioration it says:

Member States shall ensure that the programme of measures established in accordance with Article 11 of that Directive includes: 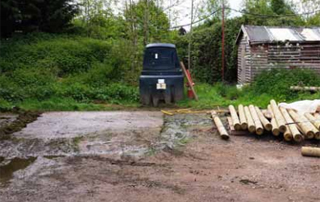 If you currently wash machinery on waste ground, or in front of the sheds and allow water to discharge away (with no prior cleansing) to a ditch, or allow it to soak away to groundwater, you are not complying with legislation.

Separators used to be acceptable to discharge to ground or watercourse. This is no longer the case as wash water can become emulsified by the action of detergents and oil. Discharges would contain hydrocarbons (oil, petrol, etc.) and cause pollution.

Separators may be used but must either discharge to:

a) Foul sewer
b) A large holding tank with no outlet and a high level alarm. This tank would need to be pumped out regularly (the water being classed as hazardous waste) and disposed of accordingly.

Prevent Pollution and Save Water

There are 2 types of water recycling systems currently available in Ireland; above and below ground.

These are installed safely below ground and all that is visible to the naked eye are the four turret covers set into the soil or turf. The benefit of the tank being sunk into the ground means that it is not a target for vandalism. Also, and more importantly, the temperature of the water underground can be maintained at safe levels. This low operating temperature allays fears of possible formation of harmful bacteria such as legionella. As with above ground systems, a biological washpad water recycling system ensures legal compliance of the water quality for reuse and discharge. Specific bacteria are added which degrade the chemicals and oil washed off the machines. 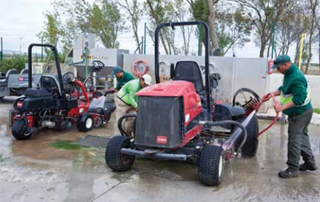 An above ground washdown and recycling system

This is a stainless steel structure that is mounted on the washpad, which stores the water for re-use. It also uses biological agents to remove or neutralize contaminants from polluted soil or water. It is designed to be used in conjunction with a preengineered clipping separation system and in-ground sump.

Water saving is a major consideration too. Using either of these systems to recycle your wash water will reduce consumption. It has been calculated that in excess of half a million litres of water can be used each year on a typical eighteen hole course by washoff. That is not only very costly to those paying for water but is a waste of a valuable natural resource.