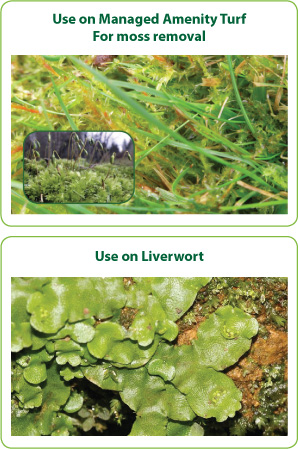 Mogeton contains an orange indicator dye so that the operator can see which areas have been treated – this orange dye fades shortly after application.

Mogeton is a moss killer designed specifically for the elimination of moss (bryophytes) on grassed areas. Its active ingredient quinoclamine is absorbed by the green elements of moss. It acts by inhibiting photosynthesis. Mogeton must therefore be applied when moss is present and during a period of active growth. In addition, applying Mogeton leaves a surface deposit which inhibits the germination of moss spores and, therefore, its effectiveness is extended over many weeks.

Approved dosages and method of application:

Against the various types of moss:
The treatment is carried out after emergence of the moss, during the active growing season, preferably when the sky is overcast and humidity is high, but not when it is raining. Do not apply during the first year after laying the grass. Grass and grass clippings should not be used for animal feed during the year of treatment.

The treatment is carried out after transplanting in pots, when moss (and liverwort) is present and at a time of active growth. Effectiveness and selectivity will be maximised by soaking the foliage after treatment (1 to 2 litres of water /m2).