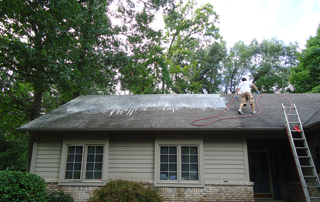 In recent months we have seen the promotion of hypochlorite products in the UK and Ireland for cleaning roofs and walls. It takes the form of additives – liquid soap and a citrus terpene or as a ready to use.

Sodium hypochlorite is rarely used on the continent: Quaternary ammoniums were introduced 35 years ago for cleaning external hard surfaces, and are the preferred ingredient for many good reasons.

The likely cause of this local evolution is the use of internet: People looking for products will, in the UK and Ireland, use keywords in English, and find American websites. As a result an American practice has found some footage among some small firms.

The immediacy of treatment, harsh as it may be, goes hand in hand with an endemic cash culture.

In Europe, and particularly in Ireland, the authorities attempt to reduce the use of hypochlorite particularly among farmers, and have in the course of 2013 and 2014 campaigned for its replacement.

Large corporations have banned its use for cleaning, either inside or out.

It is estimated that there are about 3300 accidents needing hospital treatment caused by sodium hypochlorite solutions each year in British homes (RoSPA, 2002).

Bleach concentrates available in shops are at 4.5% maximum authorised concentration.

General domestic applications typically require 0.02%, up to 0.1% for external surfaces.

Trade grade bleach in larger drums is at 14 – 15 % concentration. The application rate is generally at 4% to 5%.

This however varies with the task at hand. Rapid bleaching of timber cladding is carried

The application rate is a multiplying factor: Cleaning a patio stone using the instructions on a domestic product will use 0.02 grams of pure bleach per m2.

On roofs and walls, a contractor spraying half litre per m2 @ 5% will use 25 grams per m2, 1,250 times the amount, releasing a proportionate amount of chloride gas on much larger areas.

In Ireland, where the product is banned as a surface biocide, bleach is presented as a soap with oxidizing properties : A surfactant (soap) is added to bleach as wetting agent helping the active ingredient’s capillary ingress . It has no other function when sprayed.

In the UK, some products containing bleach have been approved, but with stringent conditions with regard to their usage. Using generic sodium hypochlorite not specifically approved for the purpose remains illegal.

A European study, published in 2008, indicated that sodium hypochlorite and organic chemicals (e.g. surfactants & fragrances) can react to generate chlorinated volatile organic compounds (VOCs).These chlorinated compounds are emitted during cleaning applications, some of which are toxic and probable human carcinogens.

In practice, the bleach reacts with the additives immediately upon mixing releasing volatile compounds within the container. The pressure builds up to the point where it can burst under pressure within a relatively short period: from a few days to a few weeks maximum.

Sodium hypochlorite has its use: If a contractor has a localised stain on a small area, say a window sill or under a parapet coping, a local application at a low concentration, preferably thickened into a gel, using a brush is not a problem. The bleach can be rinsed after the desired effect is reached.

Drenching an entire building from the ground using a hand held nozzle under 5 bars of pressure is another matter altogether. It should be noted that leading, responsible, brands make specific statements against the use of bleach on porous substrates.

What happens when sodium hypochlorite impregnates the biofilm?

The chemical breaks down into two components:

The break down also happens when bleach is in contact with mucous tissues on mammals.

White renders are very porous: It is a desired feature for the task they perform. The popular brands publish a porosity of 25% or more.

The compound resulting from the breakdown of bleach cannot be removed. The same

limitations will apply to concrete tiles on a roof.

This however is neither practical – the laps are not rinsed – nor economical.

The practice can be looked at under a technical approach, but it does not stop there:

The smell surrounding a site where sodium hypochlorite is so liberally used is unbearable over a wide radius.

The practice becomes commercially viable with the use of a scent masking agent (fragrance). This poses health and safety problems that should not be ignored.

Smell is our warning system. The nose picks the scent at low concentrations because chloride gas is very potent. Should anyone allow a contractor to do it in the vicinity of his house when the smell drives him out?

Should we be concerned for a child or any vulnerable person in the building or the vicinity?

The answer is evidently not with the contractor:

Bleach masking agents are inherently contemptuous to the public and dangerous to all exposed by the fumes.

Repeated exposures will undoubtedly have consequences for applicators.

The practice of soaking the external envelope of buildings with a solution of sodium hypochlorite presents uncontrollable risks.

The argument of immediacy of the results is shallow: It takes time for a building to become

dirty, and a few days, or even weeks in the worst case, to self- clean using a quaternary ammonium is a minor inconvenience, if inconvenient at all.

Masking the smell is unethical and patronises the public.